In light of volatile and uncertain political environments, conducting large-scale investments is a risky business across a number of African countries,

although these risks are most likely to pay off in the East African countries of Ethiopia, Tanzania, Kenya and Uganda, according to a new report from Control Risks.

London-based risk and compliance consultancy Control Risks specialises in examining the risk scenario in markets across the globe based on political, economic, and diplomatic considerations, based on which it offers advisory services to firms looking to expand into new markets.

Earlier this year, the consulting firm published a political risk map for Africa, which revealed a considerably uncertain investment environment across the continent, driven up by the war-torn regions of South Sudan, Central African Republic, Somalia, and Rwanda, all of which are facing an extreme level of risk according to the firm.

The firm’s analysis is reinforced by an international risk index released by global consultancy Marsh, wherein Africa emerged clearly as the most risky environment for business in the world. Both firms place political uncertainty high among the list of factors responsible for the risk levels, given the fact that a number of leaders across the continent were ousted in recent months after prolonged authoritarian reigns.

Nevertheless, the African continent carries tremendous economic potential for the near future, and businesses across the globe are looking for ways to invest in the region without exposing themselves. In a bid to make this strategising easier, Control Risks has now released a ‘Risk Reward index’, which enumerates the countries where investments are likely to generate the highest returns. 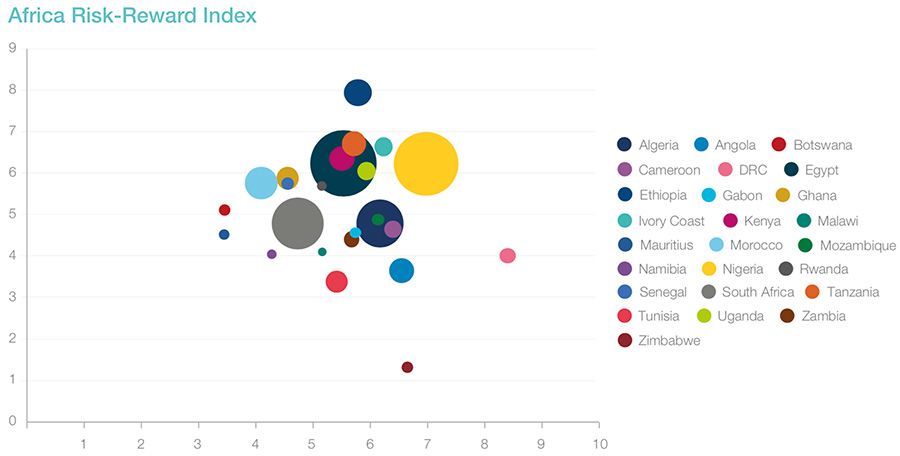 ‘Reward scores’ for a country are determined through a combination of its economic growth forecasts, the existing size of its economy, and the overall demographic structure. Based on these scores, the best sub-region for investment has emerged, unequivocally, as East Africa.

Ethiopia, Tanzania, Kenya, and Uganda all registered rewards scores that were well above the continental average. Ethiopia and Tanzania both topped the reward scores for Africa, and Kenya came in fourth place behind Cote d’Ivoire. Although lower down on the list, Uganda registered among the highest levels of improvement since the last index.

Scores were given out of 10, and Ethiopia emerged well ahead of the pack with a score of 7.94. As per the firm’s analysis, the country’s scores were driven up, in particular, by rapid growth in its agricultural and manufacturing sectors, while the ongoing privatization drive in the energy, telecoms, and logistics sectors have paved the way for substantial investments in the near future.

However, Ethiopia’s risk score was also above the continental average, which can be attributed to the political transition under new Prime Minister Abiy Ahmed. Tanzania’a score – at approximately the 7-point mark – is similarly driven up by the rapidly developing energy sector, where investments have been on the rise in recent months, although risk levels in the country are also high due to the presence of an increasingly authoritarian regime.

Kenya’s reward score stood at around 6.3 – a scenario that has received a significant boost since the establishment of a new government under the Jubilee Party of Kenya in 2017, and the subsequent introduction of pro-business policies. However, analysis conducted previously by Control Risks revealed that the country suffered from heavy public debt, and the latest report confirms that it continues to do so.

Uganda’s score was also more than 6, and improvements in its economic scenario have placed it amongst the top ten most improved countries. Factors that have contributed to this positive change include the establishment of Yoweri Museveni as President and the consequent stability and ease of investment, as well as the end of a regional drought last year.

We are a registered private company established in 2006 in Ethiopia.
ABUGIDA is a development and management consulting firm, assisting clients to build strong and sustainable organizations, assess and study effectiveness and evaluates impact of their programs/projects and make validated recommendations with evidence-based decisions making proposals.