Aside from a strong apprehension towards the emerging paradigm of cyber crime, more than 90% of the executive leaders across economically vibrant East Africa

are highly confident about the growth prospects of their company over the next three years, according to a new KPMG report.

Drawing on its research conducted amongst over 1,000 CEOs in 11 of the world’s leading economies, Big Four accounting and advisory firm KPMG has released specialised analyses of smaller regions across the world, one of which is East Africa – consisting of Ethiopia, Kenya, Uganda, Tanzania, and Rwanda.

Driven by thriving economies, the region’s growth in recent times has been particularly strong due to its efforts to diversify beyond the commodity trade, unlike the majority of African countries that continue to rely on oil and precious metals. A dip in global prices of oil and metals across the globe in recent years, though, has dealt a significant blow to the continental economy.

However, East Africa in general and Kenya in particular have become economic hubs for the trade of other goods – such as tea and coffee among others – which has kept the region above water to a large extent. The consequent economic stability has in turn bred positive sentiment across the business environment of the region. 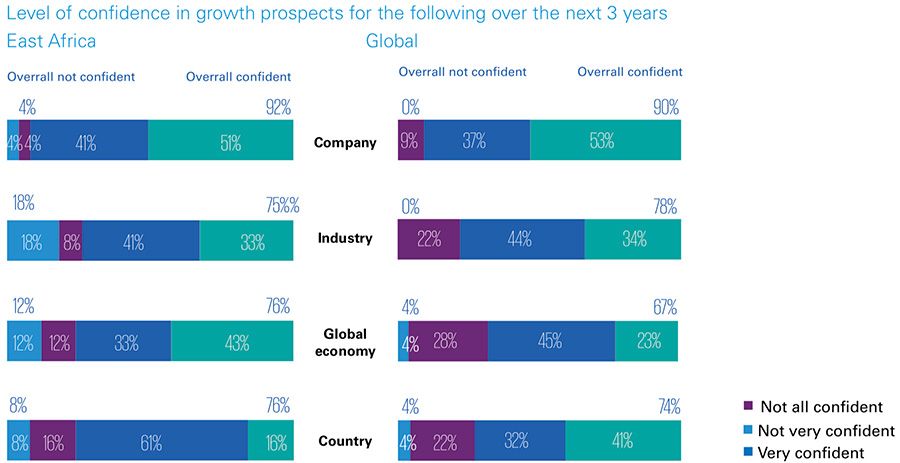 KPMG’s report has confirmed this sentiment, as 92% of the CEOs surveyed in the region predict that their company will grow over the next region, which is largely in tandem with the global sentiment, wherein 90% of executives expect growth for their companies.

Zooming in, Kenya and Ethiopia represent the pinnacle of optimism, with a 100% expectation of growth, compared with around 90% in Uganda and 80% in Tanzania. Rwanda would appear to be the weak link in this scenario, with only 40% of the CEOs in the region expecting their company to grow over the next three years.

In terms of the overall economic outlook, approximately 75% of the firms in East Africa expect the industry in which they operate to grow over the next three years, and 76% expect their country’s economy to grow over the same period. 76% is also the number of CEOs that expect growth in the global economy. The figures are nearly identical to those derived from the global survey, the biggest divergence being on the expectation for the global economy to grow, which stood at only 67% of CEOs across the globe. 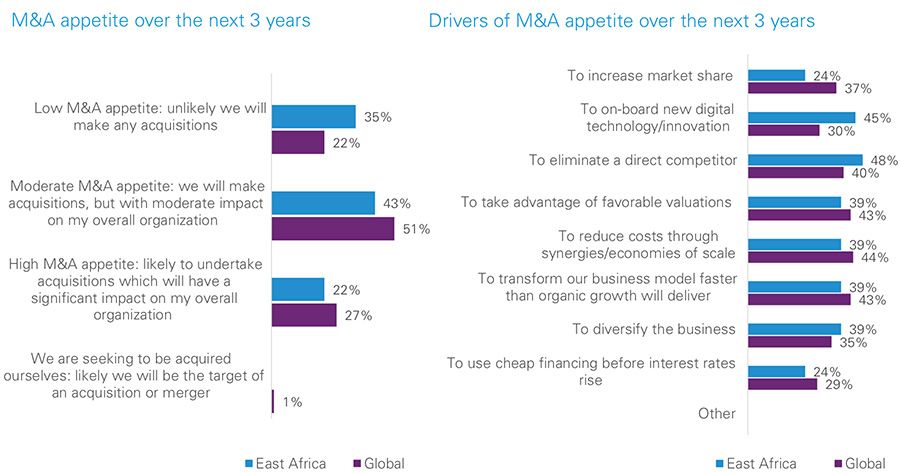 While CEOs across East Africa expect growth for their firms, they appear to have a preference for growth through organic means, with more than a third reporting a low appetite for mergers and acquisitions (M&As) over the next three years, and nearly 43% reporting their appetite for M&A as moderate.

Of those who are likely to engage in M&A activity, most (48%) would do so to eliminate a direct competitor, while the next biggest number (45%), unsurprisingly, would do so to enhance their capabilities in the digital transformation and innovation domains. Moreover, the character of M&A activity is shifting as well.

Most companies are now looking for collaborative rather than hostile deals. “I strongly believe in strategic alliances. Gone are the days where organisations can flourish on their own,” says Sanjay Rughani, CEO of Standard Chartered in Tanzania – a bank that has been exceptionally active in the development story of East Africa.

Rughani’s claim was reinforced in the report by Sheel Gill, Partner for Deal Advisory at KPMG, who stated, “As seen in more developed economies, M&A/joint ventures/strategic alliances are and remain a key growth strategy across all sectors.”

We are a registered private company established in 2006 in Ethiopia.
ABUGIDA is a development and management consulting firm, assisting clients to build strong and sustainable organizations, assess and study effectiveness and evaluates impact of their programs/projects and make validated recommendations with evidence-based decisions making proposals.